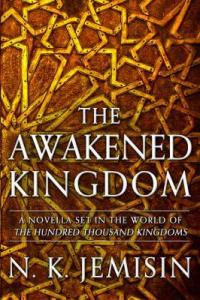 Imagine that you loved N.K. Jemisin’s The Inheritance Trilogy and then discover a new-to-you novella written in the same realm featuring a few of your favorite characters? Why, yes, please! Don’t mind if I do.

In a mere few pages, I was reminded of the joy of Jemisin. Imaginative plots that defy prediction and challenge gender stereotypes and privilege, fascinating gods and godlings (each with an individual affinity), and a realm where the women mortals bear arms while the men stay home and raise the children. Jemisin’s work exemplifies what fiction can be at its very best: a fascinating lens through which to examine your own thinking and beliefs and consider other perspectives and possibilities — and have fun doing it.

The Awakened Kingdom takes place after The Kingdom of Gods, book three of The Inheritance Trilogy. Baby godling Lady Shill visits the mortal realm to discover her true nature — her special godling affinity. Lady Yeine, Lord Itempas, and even Nahadoth (as a woman, no less!) make short appearances as young Lady Shill makes mistakes (and baby godlings) learning how to manage in the mortal realm through hilarious trial and error.

This is such a fun read and the only shame about The Awakened Kingdom is that it could have been an entire novel unto itself. As a novella, it’s meaty and delicious — Jemisin leaves you wanting more and the wonderful thing is, with a bunch of new baby godlings running around, there’s plenty of fodder for a new full-length novel set in the Inheritance realm. Yes, please.

Hi did nothing like mortals if he could help it. So he had chosen skin like fine fabric, unbleached damask in swirling raised patterns, with hair like the darkest of red wine frozen in midsplash. His irises were the banded amber of polished, petrified wood — beautiful, but unnerving, like the eyes of a serpent.

— The Kingdom of Gods by N.K. Jemisin

The description is so vivid here, I can imagine Nsana standing before me. 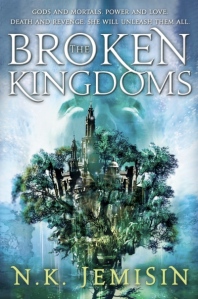 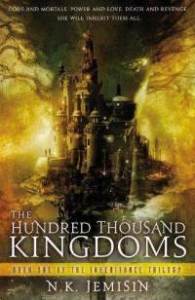 The Hundred Thousand Kingdoms is the fabulous first instalment in N.K. Jemisin’s fantasy series, The Inheritance Trilogy. There is so much to love about this book, it couldn’t possibly fit into a single blog post, but I’ll try.

First, Yeine Darr is the scrappy brown! protagonist from a small Northern outpost known for powerful women warriors and men who look after the children. She arrives in Sky at her maternal grandfather’s behest to become heir of the Arameri.

As ennu of her tribe and as half Arameri, she could command the gods of Sky (Bright Itempas (the Skyfather), Nahadoth (the Nightlord), Kurue (Goddess of Wisdom), Zhakkarn (Goddess of War), and Sieh, the Trickster) but instead she chooses to earn their respect. She wants to unravel the mystery of and avenge her mother’s death. You don’t just like Yeine, you love her. She’s strong, principled, yet wonderfully impulsive.

The backstory around the creation of the earth from out of the Maelstrom and how the Three — Enefa, goddess of light, dawn, and balance, Nahadoth, and Bright Itempas — formed the universe and everything in it is satisfying and compelling. You want to know more about how this world was made.

The push and pull between bad and good is fascinating. Delightfully, it’s not exactly what you might expect. It’s Bright Itempas, the god of light and order, vs. Nahadoth, the lord of chaos. In retrospect I found myself rooting for the Nightlord over the Skyfather. Typically, you’d like the god of light and order for good and the lord of chaos for bad, but read it and see where your sympathies lie. N.K. Jemisin’s Nightlord is a brilliant character. Imprisoned and full of pain, positively filthy with the potential for evil, he retains a clear humanity. He’s complex and sympathetic and you can’t help cheering him on.

Class figures heavily in the Amameri full blood, half blood, and x-portion-blood hierarchy. You can’t help but dislike the full bloods. They’re an unsympathetic bunch of power brokers who manipulate the gods forced to execute their every command.

There’s plenty of conflict in the book between class, race, gender, good, and evil, but it’s a lovely and refreshing take on these elements. As a reader, it’s a wonderful reminder that there are no absolutes and that flawed people, objects, and ideas are often the most interesting. Flaws don’t reduce; they elevate.

The succession ceremony — the dramatic pinnacle of this first novel — is full of surprises for Yeine and for sympathetic distant relative / underdog T’vril — both of whose fortunes alter forever. Typically, I have no issue with spoilers when writing about books, though I have to keep Jemisin’s secrets here so that you can enjoy the book as much as I did.

I have Mike Adams to thank for bringing N.K. Jemisin’s work into my world. I loved this book so much on first read, I turned right back to page one as soon as I finished it. Read it twice back to back. On to book two, The Broken Kingdoms. Squee!