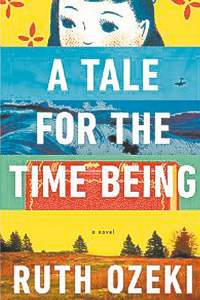 Shortlisted for the Man Booker Prize in 2013, A Tale for the Time Being rocketed to the top of my all-time favorite books list after two consecutive reads. It’s rich and deep, yet accessible. East / West, past/present, the relationship between the writer and reader, quantum theory, reflection, memory, regret, shame, cruelty, brutality, and pacifism are just some of the ground Ruth Ozeki covers in this stellar novel that left me thinking differently about how I perceive the world. I will probably be processing this book for the rest of my life. The twin protagonists, Naoko (Nao) Yasutani and Ruth, a blocked writer, are in the language of quantum theory, entangled particles — two things that share the same characteristics. Bravery, heroism, and the examined life take on new meaning viewed through the lens of this book. Highly recommended, and worth every time being’s time.

To study the self is to forget the self. Maybe if you sat enough zazen, your sense of being a solid, singular self would dissolve and you could forget about it. What a relief. You could just hang out happily as part of of an open-ended quantum array.

The cat and the atom represent two entangled particles. Entangled means that they share certain characteristics or behaviors, in this case their fate within the box: decayed atom = dead cat; and undecayed atom = live cat. The two behave as one.

Imagine that instead of an entangled atom/cat in the box, you were measuring a single electron. Before you open the box to observe it, that electron exists as a wave function, which is an array of itself in all of the places it might possibly be in the box. This quantum phenomenon is called superposition: that a particle can be in all of its possible states at once.

The measurement problem arises the moment you open the box to observe the particle. When you do, the wave function appears to collapse into a single state, fixed in time and space.

Due to the quantum principles of entanglement and superposition, until you observe it, the cat must be both dead and alive, at the same time.

But the questions his thought experiment poses are interesting: At what point in time does a quantum system stop being a superposition of all possible states and become a singular, either/or state instead?

The many-worlds interpretation, proposed by the American physicist Hugh Everett in 1957, challenges this theory of wave function collapse, positing instead that the superposed quantum system persists and branches.

At every juncture—in every Zen moment when possibilities arise—a schism occurs, worlds branch, and multiplicity ensues.

The paradox is that the particles exist in superposition only as long as no one is looking. The minute you observe the array of superposed particles to measure it, the wave function appears to collapse, and the particle exists in only one of its many possible locations, and only as a single particle.”

“The many collapses into one?”

“Yes, or rather, that was one theory, anyway. That there’s no single outcome until the outcome is measured or observed. Until that moment of observation, there’s only an array of possibilities, ergo, the cat exists in this so-called smeared state of being. It’s both alive and dead.”

“Tadaima . . . ,” I called. Have I mentioned tadaima? Tadaima means “just now,” and it’s what you say when you come in the door to your home. Just now. Here I am. Dad didn’t answer, because, just then, he wasn’t.

Finally I achieved my goal and resolved my childhood obsession with now because that’s what a drum does. When you beat a drum, you create NOW, when silence becomes a sound so enormous and alive it feels like you’re breathing in the clouds and the sky, and your heart is the rain and the thunder. Jiko says that this is an example of the time being. Sound and no-sound. Thunder and silence.

The tidal wave, observed, collapses into tiny particles, each one containing a story: a mobile phone, ringing deep inside a mountain of sludge and debris; a ring of soldiers, bowing to a body they’ve flagged; a medical worker clad in full radiation hazmat, wanding a bare-faced baby who is squirming in his mother’s arms; a line of toddlers, waiting quietly for their turn to be tested. These images, a minuscule few representing the inconceivable many, eddy and grow old, degrading with each orbit around the gyre, slowly breaking down into razor-sharp fragments and brightly colored shards. Like plastic confetti, they’re drawn into the gyre’s becalmed center, the garbage patch of history and time. The gyre’s memory is all the stuff that we’ve forgotten.

In reality, every reader, while he is reading, is the reader of his own self. The writer’s work is merely a kind of optical instrument, which he offers to the reader to permit him to discern what, without the book, he would perhaps never have seen in himself. The reader’s recognition in his own self of what the book says is the proof of its truth. —Marcel Proust, Le temps retrouvé

…when I heard it again at my old Jiko’s temple, I asked her about it. She told me it’s called the Maka Hanya Haramita Shingyo,69 which means something like the Great Most Excellent Wisdom Heart Sutra. The only part I remember goes like this: Shiki fu i ku, ku fu i shiki.70 It’s pretty abstract. Old Jiko tried to explain it to me, and I don’t know if I understood it correctly or not, but I think it means that nothing in the world is solid or real, because nothing is permanent, and all things—including trees and animals and pebbles and mountains and rivers and even me and you—are just kind of flowing through for the time being.

If you’ve ever tried to keep a diary, then you’ll know that the problem of trying to write about the past really starts in the present: No matter how fast you write, you’re always stuck in the then and you can never catch up to what’s happening now, which means that now is pretty much doomed to extinction. It’s hopeless, really. Not that now is ever all that interesting. Now is usually just me, sitting in some dumpy maid café or on a stone bench at a temple on the way to school, moving a pen back and forth a hundred billion times across a page, trying to catch up with myself.

Her own name, Ruth, had often functioned like an omen, casting a complex shadow forward across her life. The word ruth is derived from the Middle English rue, meaning remorse or regret.