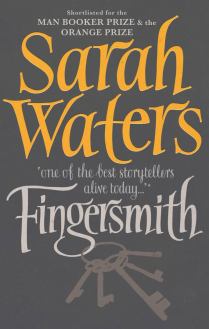 Maud Lilly, a central character, asks this question of herself and others in Sarah Waters’ novel, Fingersmith. It’s a question I continue to ask myself of the book after having finished it.

I wanted to love this book. It’s a historical crime novel, set in England. It’s filled with rogues and criminals and intrigue.  Raised in a den of toughs and “sharpers,” Sue Trinder’s a human secret — a pawn in a long game meant to extract a fortune.

Considering every character except the hapless yet pivotal knife boy, every single character is, at one point or another, given to ugly brutality. What bothered me most is the constant abject cruelty on the part of many of the characters.

Old man Lilly abuses his “niece” Maud, making her read pornography aloud to “gentlemen” visitors to Briar — a house aptly named as a container full of orneries adept at perpetrating human suffering. In turn, Maud physically and mentally abuses her ladies’ maid. Later, Maud allows Gentleman to disabuse the maid of her virtue. Lesser character John Vroom thinks nothing of decorating his girlfriend Dainty in blues and purples with regular beatings. He sports a coat of many dog pelts constructed from the skin of stolen pets. Mrs. Sucksby, the grand dame of perps, is the epicentre of the whole seething vortex of evil.

Art imitates life, yes and every single human is capable of ugly brutality, but I couldn’t help but long for someone truly good, who I could get behind and root for, above all others. Sue Trinder’s who you’ve got your money on as a reader and even she abuses the pathetic knife boy near to death.

A great portion of the novel is told twice, first from Sue’s point of view and then from Maud’s. The major plot twist aside, the pacing of the repetition is hard to plow through because it was clear to me how the book was to end. I’ll repeat myself. I really wanted to love this book. But if I were to answer Maud’s question, I’d have to say no, this book wasn’t for me.