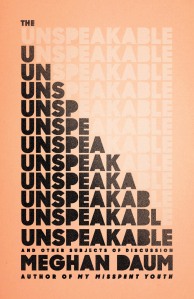 In addition to parenthood, dating seemingly incompatible men, and lesbianism, Meghan Daum’s fascinations include the Canadian painter and composer Joni Mitchell, who taught Meghan that, if you don’t “write from a place of excruciating candor, you’ve written nothing.”

If candor is a measure of success, then Daum has certainly written something.

The Unspeakable: And Other Subjects of Discussion opens with Daum’s life-long irritation with her mother and her ambivalence toward her mother’s untimely death. Daum and her mother repeat a cycle: Daum’s mother detested her own mom and was too, physically repulsed by the woman that gave her life.

Daum examines her thoughts, reactions, beliefs, and inclinations around relationships, family, and stereotypical gender roles. Daum is neither martyr nor saint and her essays are interesting precisely because she’s willing examine herself and her own (sometimes ham-fisted) actions to uncover the truth about herself. The Unspeakable is both harrowing and hilarious.

For my mother’s entire life, her mother was less a mother than splintered bits of shrapnel she carried around in her body, sharp, rusty debris that threatened to puncture an organ if she turned a certain way.

To try to explain to a 13-year-old the importance of leaving a callback number is essentially to bathe yourself in sepia tint.

I found myself relating to Daum on more than one level. She connects more easily with dogs than humans, for one, (Hello, sister from another mister.) but I found myself nodding yes as she shared her struggle to be ok with not having children. She, like me, wanted to want to have kids, but eventually realized that not having them was the right choice for her. Our reasons differ, though it’s refreshing to read about how someone else came to a similar realization in a world so obsessed with child-rearing.

Just after 3am when I finished my survey one night, I pulled away slowly in the car and something unexpected happened: I saw a corncrake. It was just a moment but it was in the road right in front of me, running into the grass verge. Its image — the pink beak and ginger wing — keeps darting through my mind: just a second that confirmed the existence I’d spent months searching for. My first and only corncrake. Usually dawn comes slowly but tonight I drove out of a cloud and suddenly it’s a new day.

What do you do when you don’t know what to do about something?

I talk to Mr. Sugar and my friends. I make lists. I attempt to analyze the situation from the perspective of my “best self”—the one that’s generous, reasonable, forgiving, loving, bighearted, and grateful. I think really hard about what I’ll wish I did a year from now. I map out the consequences of the various actions I could take. I ask what my motivations are, what my desires are, what my fears are, what I have to lose, and what I have to gain. I move toward the light, even if it’s a hard direction in which to move. I trust myself. I keep the faith. I mess up sometimes.

We know, thanks to a growing body of research on suicide and the conditions that accompany it, that more and more of us are living through a time of seamless black: a period of mounting clinical depression, blossoming thoughts of oblivion and an abiding wish to get there by the nonscenic route. Every year since 1999, more Americans have killed themselves than the year before, making suicide the nation’s greatest untamed cause of death. In much of the world, it’s among the only major threats to get significantly worse in this century than in the last.

The result is an accelerating paradox. Over the last five decades, millions of lives have been remade for the better. Yet within this brighter tomorrow, we suffer unprecedented despair.

It’s difficult for most of us to relate to a notion like this. Your sense of self, like mine, is probably tied to a body that has its entire complement of limbs. I can’t bear the thought of someone taking a scalpel to my thigh. It’s my thigh. I take that sense of ownership for granted. This isn’t the case for BIID sufferers, and it wasn’t the case for David. When I asked him to describe how his leg felt, he said, “It feels like my soul doesn’t extend into it.”

Do No Harm by ANIL ANANTHASWAMY

What did you learn today? What’s most fine about that question is that it assumes that this was a day unlike the one before, a novel day, a day of signal. By asking it you imply that there was something going on today besides rote and ritual. By asking it every single day at dinner you create a formal system, a policy, and yet in response to this very predictable question you can expect news, novelty, fresh information, mysteries, secrets exposed.

Perhaps the most serious thing that can go wrong with a ruminant on corn is feedlot bloat. The rumen is always producing copious amounts of gas, which is normally expelled by belching during rumination. But when the diet contains too much starch and too little roughage, rumination all but stops, and a layer of foamy slime that can trap gas forms in the rumen. The rumen inflates like a balloon, pressing against the animal’s lungs. Unless action is promptly taken to relieve the pressure (usually by forcing a hose down the animal’s esophagus), the cow suffocates.

The Vikings knew, for instance, that prolonged exposure to combat can goad some men into a state of uncontrolled psychic fury. They might be the most placid men in the world in peacetime, but on the battlefield they begin to act with the most inexplicable and gratuitous cruelty. They become convinced that they’re invincible, above all rules and restraints, literally transformed into supermen or werewolves. The Vikings called such men “berserkers.”

LOSING THE WAR by Lee Sandlin

(The New Kings Of Nonfiction, edited by Ira Glass)

But Life firmly refused to be drawn into a debate about what “freedom” might mean: “Freedom is more than a set of rules, or a set of principles. Freedom is a free man. It is a package. But it is God’s package.”

End of discussion. Hard to believe anybody was moved to go to war by such tripe, but it was typical. When they’re consumed by war fever, people don’t need considered rationales for the use of military force; they don’t even bother with the appearance of logic. As it happened, a purely cynical and cold-blooded calculation of the world crisis could have suggested to Americans that they could easily have stayed out. There were no treaties compelling the nation into the war, no overwhelming strategic or economic pressures; it was self-sufficient in food and raw materials, and it was geographically impregnable. Neither the Japanese nor the Germans would ever have been able to mount an invasion—and, in fact, neither ever seriously considered the possibility; Hitler at his most expansive still thought any transoceanic war was a century away. But when the Germans and Japanese looked across the ocean at America, what they saw was a nation of weaklings and cowards, with no honor or fighting spirit. One of the reasons behind the Japanese attack on Pearl Harbor—apart from the obvious military necessity of taking out the American fleet so that the Japanese military could conquer the western Pacific unopposed—was the unshakable conviction that Americans would collectively fold at the first sign of trouble; one big, nasty attack would be enough to get a negotiated settlement, on whatever terms the Japanese would care to name. In the same way Hitler and his inner circle were blithely sure that America would go to any lengths to stay out of the fight. Hitler’s catastrophic decision to declare war on America three days after Pearl Harbor was made almost in passing, as a diplomatic courtesy to the Japanese. To the end he professed himself baffled that America was in the war at all; he would have thought that if Americans really wanted to fight, they’d join with him against their traditional enemies, the British. But evidently they were too much under the thumb of Roosevelt—whom Hitler was positive was a Jew named Rosenfeldt, part of the same evil cabal that controlled Stalin.

As fanciful as that was, it shows the average wartime grasp of the real motives of the enemy.

LOSING THE WAR by Lee Sandlin

(The New Kings Of Nonfiction, edited by Ira Glass)

“You must be Dave,” she says. (In New England everyone calls you “Dave” regardless of however many times you might introduce yourself as David. I am reminded of those fanatically religious homophobes who stand on the steps of St. Patrick’s Cathedral during Gay Pride, holding signs that say “Adam and Eve, not Adam and Steve!” I have always wanted to go up to them and say, “Well, of course not Adam and Steve. Never Adam and Steve. It’s Adam and Steven.”)

The air is as clear and cold as vodka.