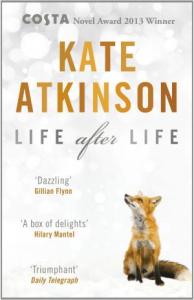 If you could go back in life and get a do-over, would you take that chance and change the course of history? Kate Atkinson’s brilliant novel, Life After Life tackles this intriguing question.

Ursula Beresford Todd, human palimpsest, gets the chance to live life after life, each time altering the future based on the sometimes not so fun events of the past. Life After Life reminded me of how the superposition principle of quantum physics plays out in Ruth Ozeki’s marvelous book, A Tale for the Time Being. Ursula’s life path has a bevy of possibilities — the array that collapses as you, the observer, follow her story.

I don’t want to say much about the plot to avoid spoilers, though Life After Life is everything I feel a great book should be. It’s a period piece, set in 20th century Europe. The characters are exceptionally deep, fully-flawed, and interesting. I loved that you get to see and experience each vivid character from many different viewpoints — their best and worst sides included — which makes for terrific, rich reading.

You’re never quite sure where Atkinson is going to take you via Ursula and you’re on tenterhooks until the very last page wondering how this imaginative book will end.

Should you read this book? In the words of Ursula’s mom Sylvie, needs must (necessity compels).

Special thanks to my friend Michelle for putting this book, and its sequel, A God in Ruins on my reading radar. 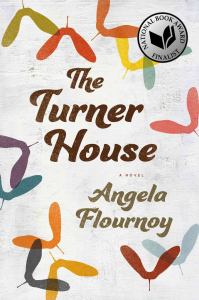 Identity figures heavily in The Turner House, Angela Flournoy’s novel about a family of fifteen set in Detroit, Michigan. The book follows the eldest Turner son, Charles, (a.k.a., “Cha-Cha”) and the youngest Turner daughter, Lelah, who in their own ways, are struggling to find a place for themselves in the present by conquering what haunts them from their past.

For Cha-Cha, it’s a ghost — a haint that visited him as a child in the big house on Yarrow Street. This spectre is a hereditary apparition who also visited Turner patriarch Francis as a young man until he left the country for life in the city of Detroit. For Lelah, it’s a gambling addiction that causes serial eviction, a tenuous relationship with her only daughter Brianne, and of course, financial collapse.

When you have 13 children in a single family, everyone is attention starved. Each Turner child jockeys for validation. They often talk over one another, interrupt, act out, and change the subject in an ongoing attempt to capture attention. Lelah gambles in search of silence and with 13 siblings, make no wonder.

This search for silence felt all too true to me. My dad grew up in a family of 11 and my mom grew up in a family of nine, but that truth as depicted in The Turner House, carried the weight and fatigue of familiarity. It reminded me too much of how some people (close family) routinely interrupt, talk over others, and change the subject to this day in that constant wearying bid for attention — even in much smaller gatherings, of say, two.

I’d hoped for something different — something deeper to come from the sheer possibilities inherent in the story of 13 siblings and their exponentially interwoven relationships. With 11 siblings orbiting around the stories of Cha-Cha and Lelah, they and their stories seemed flat. I can’t help but wonder if one or two or three of the other Turners examined more closely might have made for more intense reading.

I discovered this book in the final round of The Morning News’ 2016 Tournament of Books. It was voted second overall next to The Sellout by Paul Beatty.