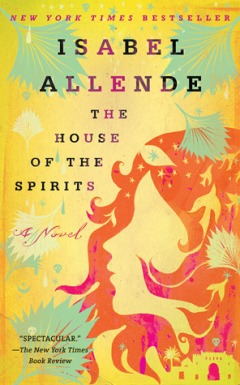 The full force of Isabel Allende’s The House of the Spirits didn’t hit me until the Epilogue, when Alba, the youngest member of the Trueba family, realizes that to go forward, she must reject the generational cycle of violence and revenge and choose love.

The prose is vivid and evocative. The narrative rolls out like kite string in a windstorm. The characters are deep, quirky, and endearingly flawed. Some, like the ethereal and otherworldly Clara, have only a tentative foothold in this world. How cool is that?

Formerly powerful Esteban Trueba, human hurricane, longtime congressman of the deposed establishment right, serial rapist, oppressor general of basically anyone who comes into contact with him, is unable to save the only thing left in the world that he loves — his granddaughter Alba  — after she is disappeared post-coup by the military regime. It’s not until he entreats Tránsito Soto, a whore-turned madam, that Alba is returned. Raped and broken in body but healing, she vows to “break that terrible chain” of violence, oppression, and vengeance.

It would be very difficult for me to avenge all those who should be avenged, because my revenge would be just another part of the same inexorable rite. I have to break that terrible chain.

Pride, vengeance, family, loyalty, and survival all figure heavily in this amazing novel that I’ll probably be unpacking for as long as I live. I want to thank Lori McLeese for putting her beloved Isabel Allende on my radar.