Henry Hayward is the Minister Without Portfolio — a man free of the entanglements of a significant relationship and children, after having been left by his girlfriend Nora, because she wants to live a dangerous life.

What Nora doesn’t know or fails to notice is that living a dangerous life doesn’t mean putting your life in physical danger. It means being vulnerable — truly being in love with and loving someone — no matter what, overlooking and absolving the messy awkwardness inherent in relationships to build something worthy — a happy life together.

Together, Henry and Martha live the most dangerous of lives — trying to make a life together despite the looming ghost of Tender Morris — trying to build a family with Tender’s unborn child on the way, rebuilding a ramshackle home, literally from the ground up.

This book is a great read. Winter’s spare style reminds me of Lisa Moore — who also writes of Newfoundland. Worth your time. 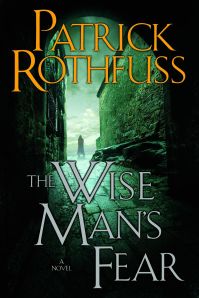 The Wise Man’s Fear is book two in Patrick Rothfuss’ epic fantasy trilogy, The Kingkiller Chronicles. I enjoyed this book very much. As I approached the end — as 1285 pages in the story of Kvothe began to draw to a close — I lamented the dwindling number of pages remaining.

As in the first novel, The Name of the Wind, I struggled with Denna as a character. I find her motives vague and her constant disappearances frustrating.

After 2000+ pages of The Kingkiller Chronicles, I still only have a superficial understanding of her. I want to like her; I really do. As a reader, you learn very little about her in this book. She remains an enigma wrapped in a mystery.

Rothfuss starts to reveal more about her character during a passage in which Kvothe follows Denna into an unsavoury part of town at night. In the end, the mystery and frustration around her deepens because that night ends, and we never find out anything further about that scene. Without knowing anything about Denna’s backstory (a chapter or two in the book told from her perspective might have been helpful) you question Kvothe’s judgement as he continues to flail at a relationship with her, only to be repeatedly rebuffed with Denna’s familiar and frustrating refrain, “you’re just like all the other nasty men in my life.” Sometimes you wish that she’d disappear for good.

Despite Denna, I’m looking forward to book three, which is due out sometime in 2015.

One of the things she said was she wanted to live a dangerous life.

Minister Without Portfolio by Michael Winter

The truth is, Henry knew, any time you try to nail down a truth about somebody, you come up on one side of them, left or right, that makes them worse than what they are, never better.

Minister Without Portfolio by Michael Winter